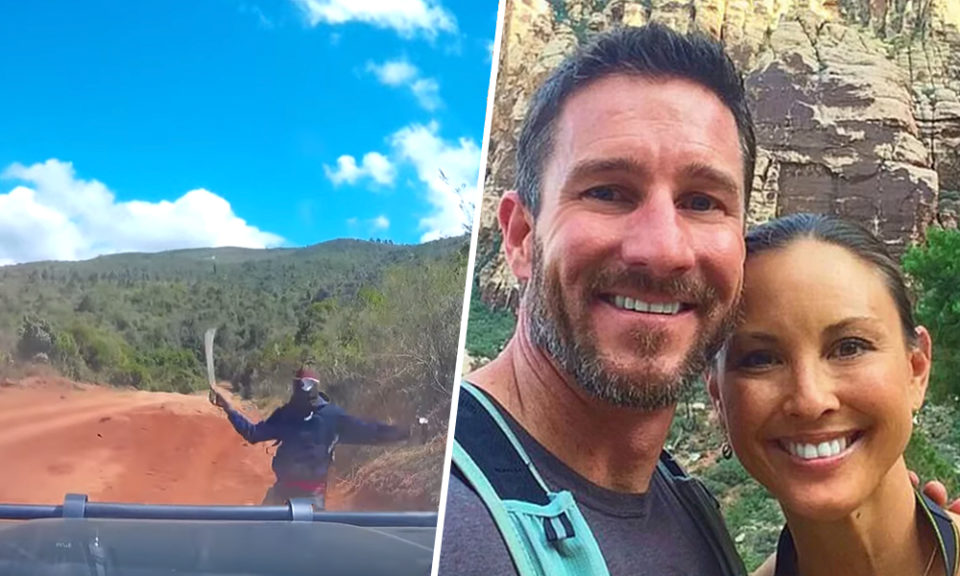 A couple narrowly escaped robbers wielding machetes on a dirt road in Kenya, and have now shared their shocking story with the world.

Bryant and Lauren Swenson from Utah, US made the move to Nairobi three years ago to to open up a CrossFit gym, alongside their three children.

On November 30 2018 (Please note the time stamp is wrong on the video), Bryant and Lauren had been driving along the Old Kijabe Hospital Road, close to Maai Mahiuin when they found themselves in a living nightmare.

Ahead of them were three masked bandits attempting to rob a white van. When the van managed to get away, the crooks turned their attention to Bryant and Lauren’s Toyota Land Cruiser.

Horrifying dash-cam footage shows the bandits running directly towards the Swensons, waving their machetes in the air.

Despite experiencing the sort of peril which would cause many a good driver to stall, accidental action hero Bryant put his foot on the gas and zoomed away with milliseconds to spare.

Following their incredible escape, Bryant shared footage of their brush with danger on Facebook, writing:

Our fitness can prepare us for life, but there are times when things happen so fast that we can only give credit to God for His protection.

This happened yesterday on our way up to Kijabe with Shiv Simani, [Collins Monde], and [Lauren Swenson]. We came upon 3 bandits robbing a matatu. I had to back up long enough to roll my window up before passing by the guy wielding the ponga (machete.)

The guy on the far left had a handgun, but couldn’t get it out of his waistbelt in time. They chose this spot for ambush because the road is very rough, but fortunately we were in my 80 series. Also thankful for a manual transmission.

Just before encountering the bandits, we passed two armed police on foot. The gunfire you hear at the end of the video are the cops engaging.

What an amazing story of survival when faced with the most terrifying circumstances.

The time stamp is wrong on the video